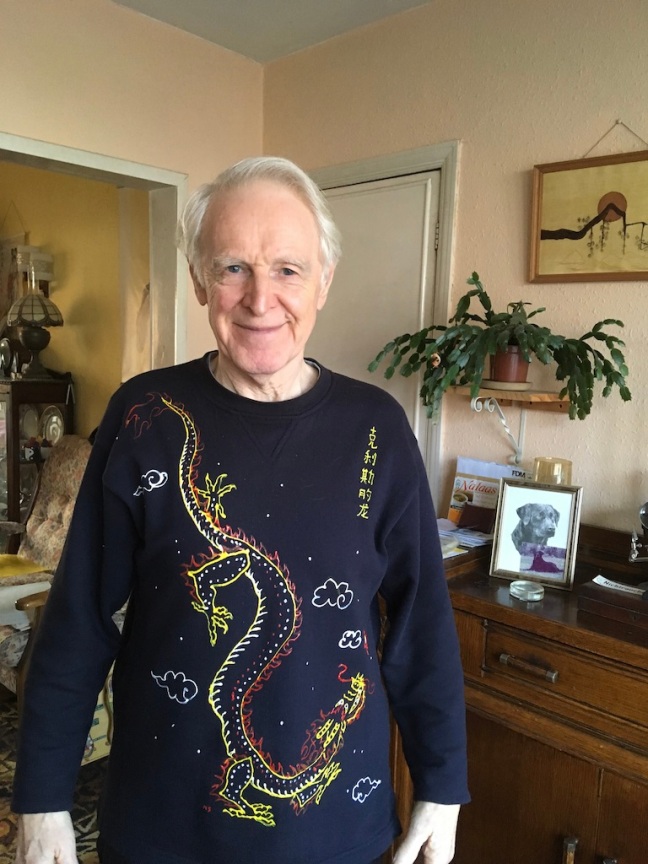 Chris told me a story when I first met him.

Three Young Adults, around 16-years-old, wear their trousers low, below their waist. They are walking beside the lake, laughing. They stop when they see an old man, Chris Lewis, with white hair is moving his body slowly and gracefully. Tai chi.

The boys believe that Chris’s movements are effortless and pointless, so Chris challenges them to try to stop him. The three boys grin to one another and rollup their sleeves. I put down my book and sit up straight.

But the boys have no sense of balance. They struggle to remain on their feet. Their efforts to grab him prove fruitless. Chris is unaffected. He does not stop practising his tai chi; instead, he uses his movements against the boys. Hes lightly adjusts the movements to avoid the boys.

The boys are unable to make physical contact. They almost fall over but before they hit the ground Chris catches them and helps them recapture their balance.

I found this interesting and once the boys had left, a sense of shame trailing behind them, I couldn’t help but feel intrigued and impressed.

Chris and I are great friends. In the last three years, he has become my personal tai chi tutor and has kindly agreed to be interviewed.

A steam of green tea mixed with ginger sits on the coffee table. Plants lighten the room, spaced out beautifully and Chris sits in an armchair, wearing a jumper with a Chinese dragon design. There is a sense of calmness radiating from him. I ask Chris what significance the dragon holds for him. Chris says without hesitating

‘They signify power, peace and spirit’

Chris is slim in build, tall and fit.

I ask Chris how he sees his health. He says that it is excellent, better than most people his age:

‘I don’t go and see a doctor. I hardly ever need a doctor. I mean people especially in my age is a regular visit to the doctors, don’t they? But I don’t.’

I ask Chris why he thinks that is. He sips his tea before he answers. His hand strokes his chin. I take a sip of my own tea, black, while Chris considers his answer:

‘I’ve taught tai chi for over 30 years and practice four-five times a week. Every month, I practice with other tai chi Groups and I go to Dojo.’

He takes another sip of tea and gently places the cup on the coaster:

‘In Nottingham. Once a week. I also go to yoga, walk and cycle.’

I comment on the beautiful plantsin the room and how nicely lit it is. I ask:

‘Is there any difference practicing inside compared to outside?’

He relaxes into his chair, a grin spreads across his face:

‘Oh, yes! When you practise outside you feel like you are as one with Mother Nature. You’re in harmony with the universe.’

There is a photo of two dogs on thefireplace mantel piece, framed and neatly kept. Labradors, one brown one black.The room feels light and homely.

‘Who do you teach tai chi to now? and what is the most important rule when practising tai chi?’

I ask.  I was anticipating balance, or position. Something to do with the movements butChris takes his time to answer. Considering. He refilled the kettle and switches it on:

He refills his cup, no sugar, just ginger and asks if I want another one before continuing.

‘But it’s also a great stress reliever, and a gentle way to get exercise and regain health. You need to clear your mind, take your time, don’t rush the moves; the slower you are the more Qi you will feel. Concentrate your mind on your breathing, on your lower abdomen,’

He flexes his shoulders, stretches his arms and neck then sits back in the armchair, passing me my tea.

‘What do your students think of tai chi? How has it helped them?’

‘They say tai chi has considerably helped their condition or they feel more relaxed, more patient and less stressed. I feel they also developed a habit of self-love and love others.’

I know and it is clear by his tone that his students mean a lot to him, and he generally cares about their health and wellbeing. I ask.

‘This is all very insightful, Chris, what got you started?’

‘Oh, it’s a long story. I have a friend who had this agoraphobia which made him afraid to go out. I did some research and found if he could balance well it would help him to build his confidence to go out. You know the universe always gives you what you are looking for. The next thing I saw was a man standing on one leg and practising his tai chi. I thought that’s good balance and I encouraged my friend to go and learn tai chi.’

Chris barely pauses for breath. He is engrossed in the story he is telling, passionate. His eyes light up as he reminisces:

‘I was a police man back then.After work, in the evening, I would drive my friend to the tai chi centre. I was really tired when we got there you know. I had worked all day. But I also took part, and when we had finished I was so refreshed. I felt so good and I wasn’t tired anymore, so I have been going ever since. It improved my quality of life. I was calm at work, focused on the task in hand, everything became easy and simple for me. Then other people asked me to teach them and finally I quit my police job at age 45.’

When Chris picks up his cup again and takes a sip, I take it as a signalhe has finished with his story. This confirms the old-age saying of helpingothers helps ourselves. It gives that satisfaction we need when we know we have done a good deed.

‘For me it was always time. I felt I hadn’t had enough time to teach everyone who wanted to learn. When I teach a group, sometimes someone didn’t do the movement right, I had no time to correct them and I had no time to do one to one sessions. I had too many classes to run and I was always on the go, getting ready to drive to a different centre to teach’.

‘What did you do about it?’ I ask, ‘and what’s the biggest benefit for you from practising tai chi?’

I searched for people who could teach tai chi and asked them to take on some of my classes. Since the age of 72, I have kept only one group. It’s a small group, less than 20 people. 7 of them are older than me. The biggest benefit is my health, clarity and calmness.I never feel stressed.

‘The creator of 12 Dao Yin Yang Sheng Gong which is a set of qigong exercise, was told by many doctors that it was impossible to cure his heart disease and cancer and many more serious problems in his physical body. He was told to go home and die. But he didn’t want to die and created the exercise. He is still live with us today and the world is learning the exercise he created.’

Chris picks up the cups and puts them in the washing basin. He turns the taps on and uses a drop of washing up liquid. He faces me as the sink fills up:

‘I don’t really use the word ‘heal’ normally.’ He says, ‘But in the past I have healed dozens of people’s pain, like leg pain and side pain, discomforting headache, backache. Also there are people who say their pain is still with them. So I would say, I can heal some people but not everyone.’

I asked Chris to recommend a set of tai chi exercises for a beginner.

‘I would recommend the FiveElement. It naturally slows the practitioners speed and engages their breath in a gentle manner and it can straight put the practitioner in the relaxed state.If they practise it properly for a while, daily, they’ll start to understand what the fuss is about.’Chris stands up and swiftly twirls with one of his back heels so as to face me. He smiles and bows. I think back to those boys a few years ago when I met Chris, wondering where they are now.

3 thoughts on “Into The Gentle Dragon’s Den: An Interview with Tai Chi Instructor Chris Lewis”

07887990763
Private sessions need to be booked in advance by contacting Lily.

where creativity storms on

let's talk about life and stuff

A community with environmental and healthy resources

MY ALTER EGO AND ME

The official website for Tessa Barrie and her Alter Ego, Sally Edmondson, or is it the other way around?

My thoughts on different ways of creating mindfulness and holistic living in our busy lives through creativity, nature, and healthy eating.